This post is adapted from my upcoming book: Pitfalls of Fear Driven Leaders and how to Overcome

The “It’s OK to Fail” club has more and more members. Its adherents are industry leaders, sports figures, executive and life coaches, therapists and people with success stories because, truth be told, they almost all had to fail before their first quantifiable success. Beyond that, business and organizational development specialists know the vital importance of freedom from fear of failing in innovation and the formation of authentic, productive work environments.

The wonderfully titled John Maxwell book, Failing Forward has as its subtitle: How to make the most of your mistakes. Vlogger Chantelle Adams, in her video series “The Courage Revolution”,  has an episode entitled, “How to Fail Like a Pro”.

So failure is finally coming out of the closet and getting the honor it’s due!

To coach yourself or others in how to make the most of failure, here are some tips

Explore, then challenge fears of failure asking questions like,

1- How were success and failure viewed when you were growing up? Were you rewarded for being successful? Punished for failing (classes, on the sports team, in physical beauty)? What was the basis of receiving love as a child from your caregivers? How consistent was that love?

2- What is your first memory of not succeeding at something? How did you react? How did others react? What did you then do?

3- Have you been in work environments where mistakes were treated negatively or covered-up from the highest levels?

The expression “Get back on the horse” after falling is both literal and figurative. Riders and athletic coaches, alike, know that getting quickly back to the thing you used to do – especially after a painful experience – is the best way to push through to success. Gymnastics coach Bela Karolyi famously coached (and carried) his injured star athlete Kerri Strug from excruciating pain to victory.

The coach would help people distinguish between fear-driven vs. realistic consequences of failure in the large scheme of things.

A failure coach would help the coachee process the answers to the above questions, then ask them, example by example, to cite the lessons learned from their greatest failures. Whether divorce, having a child join a gang or being fired.

I’ve missed more than 9000 shots in my career. I’ve lost almost 300 games. 26 times, I’ve been trusted to take the game winning shot and missed. I’ve failed over and over and over again in my life. And that is why I succeed. – Michael Jordan

Coachees must be helped to acclimate to emotional (sometimes physical) discomfort. If you weigh 400 pounds it is daunting to begin an exercise program because it is likely to be very physically discomforting and perhaps even painful. Confronting that employee about their dismal performance may be so emotionally daunting you have avoided it for months. Leaders especially must become comfortable with discomfort. That is the edge that separates the wheat from the chaff.

Develop a bucket list of challenges, both personal and professional, weed out the impractical ones, and begin crossing them off the list. It is important to include a physical challenge, a relational challenge and a psychological challenge. The list may include challenging physical exploits, psychological fears (public speaking) and unfulfilled fantasies (oh I could never sing Karaoke or deadlift three hundred pounds..)

A new paradigm for failure can help leaders not only lead themselves but better lead others under their charge by powerfully modeling resilience. If we can coach our teams through failure then we can spur innovation, break down organizational silos and produce products and services that exceed our expectations.

Knowing that we can not only survive a failed attempt but thrive through it, can revolutionize how we live our lives. So fail on, learn from it, and try again! 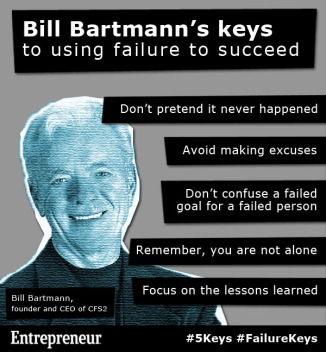 Who you are is how you lead

Can everyone become a leader?